Oh, I am such a wreck. I'm falling asleep as I type this, and I've started to feel sick as well. So I actually have some of what will appear on this Web page mostly written already. I just can't stay awake and between drowsiness and feeling sick I figure the thing to do is to put additions to this Web page off till later on. Check back for updates.

The next WBAI LSB meeting is scheduled to be held on Monday, November 29, 2021, it will probably be held as a teleconference meeting, as the 29 previous public meetings were because of the pandemic. This will be an executive session meeting, and so will be closed to the public. This will also be the last meeting of the Eleventh WBAI LSB, although arguably the Delegates Assembly of December 8, will be the truly final meeting of the Eleventh WBAI LSB.

The LSB meeting occurred more than a week after the Pacifica/WBAI elections were over. So there was no posturing for the sake of an imminent election.

Before the meeting I had put out a written Treasurer's Report for all to read.

Some years ago the WBAI LSB voted to hold its regular meetings on the second Wednesday of every month, subject to change by the LSB, with the vote to hold an executive session and a Delegates Assembly we have the following schedule:

All of these meetings are set to begin at 7:00 PM. Yes, the two meetings of the Delegates Assembly and the new LSB are scheduled for the same time. Yeah, details. The Twelfth WBAI LSB will be seated at some time on December 8, 2021. 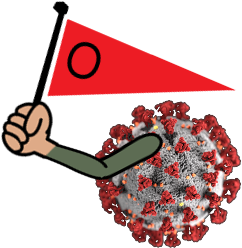 Is Omicron That Dangerous?

Borders are closing and markets are plummeting around the world as scientists take a cautious attitude toward the new Omicron variant of COVID-19.

The World Health Organization (WHO)said a new COVID-19 variant found in southern Africa was of concern on Friday. A few dozen cases of the new variant have been identified in South Africa, Botswana, Belgium, Hong Kong and Israel.

Quite a number of nations are now banning travelers from several southern African nations from entering their countries. The United States has banned travel from Botswana, Eswatini, Lesotho, Malawi, Mozambique, Namibia, and Zimbabwe.

This new variant was originally called B.1.1.529. On Friday it was reported that the WHO as going to call it Nu, but later on Friday, just before we started recording this program, they officially named it the Omicron variant, after the 15th letter of the Greek alphabet. I speculated that maybe the WHO didn't want to confuse the name of the newly discovered variant with the word new or maybe they were superstitious and didn't want to name it after the 13th letter of the Greek alphabet. Pickles of the North cleared that quandary up by telling us that the WHO had already named another variant, one of lesser concern, Nu. So that settled that tiny mystery. Calling this new variant a variant of concern, puts it in WHO's most serious category. Officials at WHO said, This variant has a large number of mutations, some of which are concerning. Preliminary evidence suggests an increased risk of reinfection with this variant. Dr. Anthony Fauci said the new variant has about 30 mutations, and about 10 of them are on a part of the virus that's associated with transmissibility and immune protection. So this variant may be more transmissible, maybe even more infectious than the delta variant, and may escape the current vaccines to an extent yet to be determined. Nobody knows much about it yet, but they're being cautious.

And the markets around the world are plunging, with the Dow dropping by about 2.3% on Friday.

One open list that no longer exists was the WBAI specific Goodlight Web based message board. It was sometimes referred to on Back of the Book as the bleepin' blue board, owing to the blue background that was used on its Web pages. This one had many people posting anonymously and there was also an ancillary WBAI people board that was just totally out of hand.

The contents of this Web page are copyright © 2021, R. Paul Martin.