The following E-mail came in on the morning of October 7, 2019, from the possibly former WBAI General Manager:

The interim Executive Director terminates all of WBAI's employee as if this morning. They cited financial problems. As of now WBAI is controlled by Mr. Vernile and the National Office. There is a show on the air now that I do not recognize. This means your shows are no longer on WBAI per this action by Mr. Vernile.
I will keep you posted.
Thanks much for all you do,
Berthold

--
To unsubscribe from this group and stop receiving emails from it, send an email to staffannounce+unsubscribe@wbai.org

And then we got the following from interim Executive Director John Vernile:

--
To unsubscribe from this group and stop receiving emails from it, send an email to staffannounce+unsubscribe@wbai.org

You can click here to see that attached letter.

On the afternoon of October 7, 2019, the possibly former WBAI interim Program Director sent out the following:

Dear Staff,
As of today Pacifica has shut down local operations of WBAI. IED John Vernile says it is due to a severe economic shortage.
He says, We are out of money and had no other viable options to keep staff on. With no local staff all local shows have been removed.

I've been told that network programming is being provided to protect the license. The network programming BAI from our sister stations and affiliates as well as from the BAI archives. Vernile says, This is not the end of listener sponsored noncommercial WBAI, but a pause in our local operation to regroup and raise needed funds. He says sale or swap is not an option.

I am heart broken over this move and thank you, WBAIprogrammers, for your hard work and notes of support. There will be more information in weeks ahead.
Regards,
Linda

Sent from my iPhone

--
To unsubscribe from this group and stop receiving emails from it, send an email to staffannounce+unsubscribe@wbai.org.

The injunction is in two parts. Part one is here, and part two is here. So this injunction says that WBAI is to go back to it's usual situation until at least October 18, 2019. We'll see if the bylaws hijackers try to do an end run around that with another judge in another court. We'll see if this John Vernile guy is willing to get arrested in order to enable the bylaws hijackers. Drama, always drama.

Unbeknownst to anyone outside of their little group the so-called Pacifica Restructuring Project had filed a lawsuit in Federal Court in Alameda, California on the very day when one of them, Crosier, had burst into WBAI with iED John Vernile and others to shut down the station. Basically, this group petitioned the Federal Court in California to force their replacement version of the Pacifica bylaws on all of Pacifica. They did this without even notifying the people whom they were suing that they had filed such a lawsuit against them. I am told that Pacifica's General Counsel Ford Greene also never told the PNB members who were being sued that this was happening, so of course they never replied to the lawsuit. As a result the Federal Court ruled in the favor of the nine people who are trying to take over Pacifica.

New Information From People On the Scene at WBAI Tuesday, October 8, 2019

Tuesday, October 8, 2019 13:29 (ET) — I've been on the phone with WBAI General Manager Berthold Reimers and one of the WBAI engineers and I'm told that some of WBAI's broadcast studio was partly dismantled while iED John Vernile and others were occupying the radio station. I'm told that they dismantled more of the new studio that was almost ready to go live as WBAI's main broadcast studio than they did of the old studio that WBAI was actually broadcasting from. One important piece of equipment, the Emergency Alert System (EAS) module, was removed from the station. Without the EAS WBAI cannot go back on the air. This is why WBAI is still pumping out the hijackers' audio from elsewhere.

Why all of the vandalism while the hijackers were there? Is this just the new Pacifica way of doing things? An open question at this time is whether John Vernile and his cohorts will be held in contempt of court for the vandalism and removal of equipment vital to WBAI's return to the air? That certainly seems to violate the temporary restraining order. I also wonder if criminal charges for some of these hostile actions are possible? I'll post more when I've learned more.

UPDATE October 9, 2019: We have been told that in fact the Emergency Alert System (EAS) component was removed from WBAI's premises at 388 Atlantic Ave. and reinstalled at the transmitter site in 4 Times Square. This is what's allowing the coupsters to legally broadcast audio from other stations on WBAI's 99.5 FM frequency.

Wednesday, October 9, 2019 — The WBAI LSB met and passed a long resolution rejecting the coup that has shut down the station. The document was approved by all 18 WBAI LSB members present at the meeting and the Chair, who is not allowed to vote, voiced her approval of it after it was passed.

The long document was amended in the course of the debate and discussion about it. Here is a copy of the amended resolution passed by the WBAI LSB. 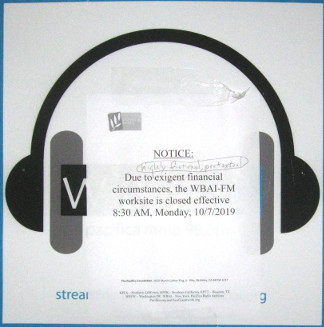 Thursday October 10, 2019 — The two sides went to court. The TRO was vacated by the Appellate Court, except for the part about Pacifica not being allowed to summarily dismiss the WBAI Paid Staff. Here's a copy of the handwritten court order vacating almost all of the TRO.